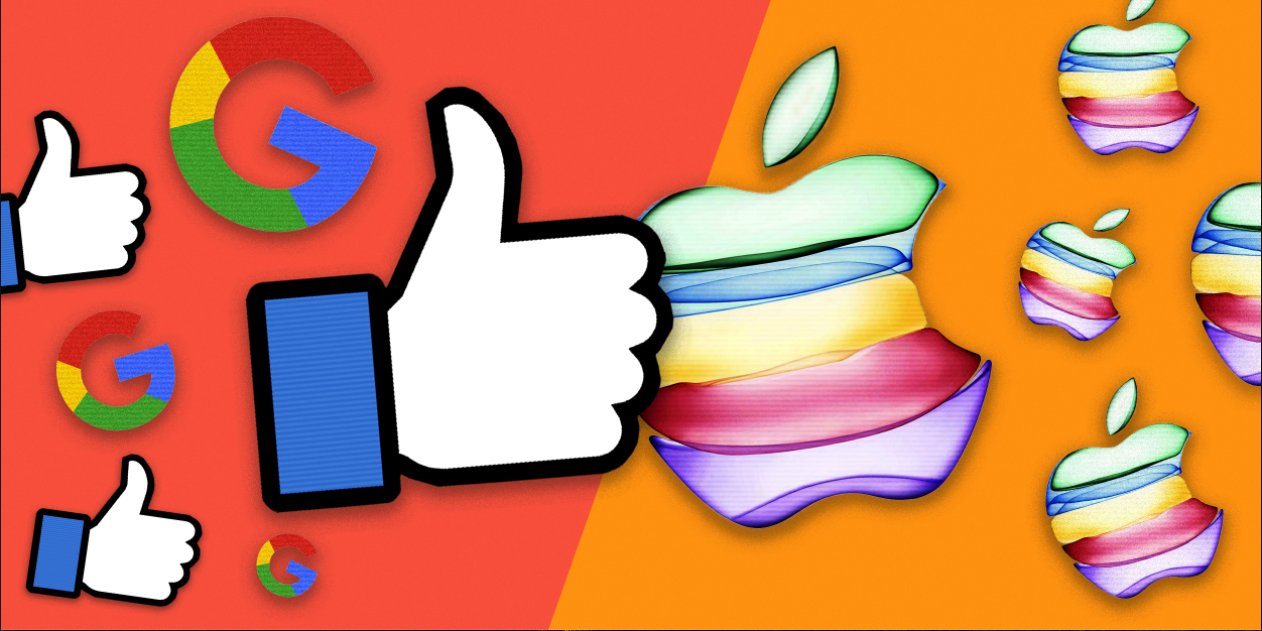 Last week the digital Titans clashed again – and in the next few months we’ll all have a ringside seat as the impact is revealed. Who are the Digital Titans? They are the handful of global digital companies that are now ever-present in our lives. They own entire ‘countries’ in the digital world, social-media, search, shopping, eSports, Music, Video.

But first a quick primer…

The Digital world is funded by digital advertising. All those services that we use for ‘free’ are paid for by brands who’d like to get our attention. Over the past 25 years, global digital advertising has become relentlessly efficient at doing this. The industry’s leaders have become some of the worlds largest companies. They’ve done this through personalisation.

In theory, personalisation means that the advertising that we see is a perfect match for us. The dream is that advertising disappears and transforms itself into helpful information that makes our lives better. Of course, as we all know, this is very rarely, if ever, the case.

The problem is that, to work at all, today’s digital personalisation requires hoards of personal data about us. This is gathered and traded, creating billion dollar market places for our data – without our knowledge or our permission. In a word, it’s illegitimate. And because it’s built on secret surveillance it’s not particularly good. However, without even this broken personalisation, the price that could be charged for each advert would collapse and people would each need to see thousands more adverts to pay for their ‘free’ digital services (social media, video calls, search etc).  Increasing the volume of bad and mismatched advertising degrades the experience and people simply leave the service. So we’re locked in a broken system that rewards a handful of players with disproportionate revenues and incentivises them to maintain the status quo and expand their reach across the entire digital ecosystem.

What’s more, each of us has only a finite amount of attention available to view these badly personalised adverts. Attention is scarce – hence digital platforms like social media and video apps have evolved to keep us all ‘hooked’ on an endless scroll of content, including personalised advertising. The algorithms are designed to mould behaviour to serve the digital content engagement rather than creating content that serves people first. This manipulation in turn leads to all kinds of unintended consequences: fake news, deep fakes, electoral manipulation and commercial scams.

This combination of attention manipulation and illegitimate personalisation means people increasingly distrust the digital tools and services that they use. Trust has become the digital world’s most valuable commodity.

Unlike most of the digital titans (Google, Facebook, Instagram and increasingly Amazon) Apple makes money on selling premium hardware and applications with huge profits: 50% gross profit on sales of iPhones, iMacs, Watches & Buds plus 30% profit on all apps purchased on the apple App Store, plus 30% on all in-app purchases in those apps. Apple is now worth two trillion dollars. It sells just 20% of the world’s Smartphones but makes the vast majority of global Smartphone profits. Advertising has never been a core business line. Its main competitor is Google (Android) which makes all its revenues from advertising – even subsidising the Android operating systems to enable it to get its hands on all that lovely (valuable) personal data.

Apples Move: In October, Apple will effectively close its advertising data ecosystem removing advertising tracking from devices unless there’s an explicit opt-in (estimated by insiders to be 5% or less of users). This positions Apple as the privacy preserving premium mobile ecosystem (if you can afford it) and screws the advertising revenue led competition. Clever.

However, Google aren’t the losers, they already have 80% of the world’s mobile internet users (3 Billion people) using Google Android devices. They also handle 90% of internet search, own YouTube and provide software for devices like Smart TVs. They have plenty of data, and buy in yet more personal data from the various hidden marketplaces and brokers. Google has become the largest company in the world (alongside Apple) by providing (illegitimate) personalisation from personal data.

In fact, Google is going further. In a move heralded by them as driving better digital privacy and trust, Google has announced that it will remove the tracking cookie from its ecosystem and introduce its own proprietary tracking ID. Google is shifting the means of personalisation from an industry standard to a proprietary part of its own software stack, further consolidating its hold on global digital personalisation.

So who are the losers?

With Apple devices going dark and Google limiting tracking, Facebook has a huge problem. This is, in part, why they’ve been trying to expand into retail (versus Google and Amazon) and global digital payments (via FaceBook Libra, which blew-up last year). And also preforming a belated pivot (or maybe that should be pirouette) to ‘Privacy’.

As an immediate consequence of the Apple move, Facebook is closing down advertising services for Apple phones. It will no longer have access to the ‘events’ that their advertising drives (a purchase or an app download). So it will shift from its existing “deterministic” reports (what actually happened) to “probabilistic” reports (a best guess using some probability maths).  This will have a major impact on Facebook financial numbers in the next 6 months. Also, as a “Self Reported Network” (SRN), it’ll also need to convince brands and advertisers that its ‘best guess’ algorithms are accurate and not over reported. Expect a big marketing campaign.

Facebook is a huge and powerful organisation – but in addition to being squeezed by Google & Apple it has also been hamstrung by its own, well reported, privacy/trust screw ups. It will need to respond and get back on the front foot. It may try something more radical than Libra in 2021.

Amazon: has quietly grown to become the 3rd largest player in AdTech (behind Google & Facebook group) and continues to grow quickly. It uses 1st party customer data from its store and ecosystem (alexa, prime, video etc). In our data surveys at CitizenMe, Amazon is consistently the most trusted of all the Tech Titans with our data because the Amazon store is a transactional experience. Amazon promises a good price with fast delivery, it delivers. The moves by Apple and Google will be an irritation but nothing more.

The real losers are the now traditional AdTech Industry. Collectively, the non-GAFA (Google, Apple, Facebook, Amazon) AdTech industry is comprised of thousands of companies. They once earned the vast majority of global digital advertising revenues – however this has shrunk to 37% and continues to do so. AdTech has spent decades trying to personalise advertising using illegitimate data, with very poor results. They are now getting seriously squeezed by Apple and Google. Their options are limited options:

While all of the titans are driven by short term profits, the real end game goes far beyond this. The organisation that is best at providing us with Hyper Personalisation will become the personal digital agent for billions of people, helping us all to organise the lives around us. This agent will make Alexa, Siri and Google voice look like babbling babies.

There is an obvious conflict of interest when our personal AI is provided to us by a company that owns the proprietary algorithms that make it work – and which is driven by a model that seeks to profit from our use of the AI.

Apple appears to be shifting away from business models which are explicitly focused on harvesting personal data for persuasion and manipulation. That said, it is exceptionally good at extracting value from the data that we hold on our devices for personal and corporate insight.

At CitizenMe we’re working on the “Zero Data” platform and tools that empower us all with our own personal and a personal AI. We’re starting by unlocking ‘hyper-insights’ which will enable ‘hyper-personalisation’ for you and on your terms.

All stories by: StJohn Deakins
The Future of Data is ‘Zero Data’
Hailed By The Economist As Solution For TikTok